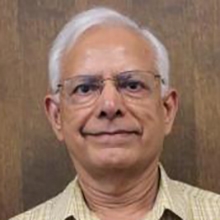 I identify as 1G from the very beginning of college. Though, I was not having many friends. But that allowed me to concentrate on studies. Being very thankful to my parents and to the sources of scholarships that allowed me to proceed. I have been very grateful and trying to give back in various ways. Trying to be supportive of those in need in education/research. I have now created named scholarships in my undergraduate alma mater (IIT Bombay) – named after my father who had to drop out of high school and take a job to support his family.

AND an excerpt from the Duke Chronicle story “Professors Share Their Stories as Low-income, First-gen Students” 12/9/19 by William He:

Kishor Trivedi’s father worked as a railroad station master in a small village in rural India. As a high school student, Trivedi lived in a nearby town and attended school in the state of Gujarat. As a senior, Trivedi learned of the Indian Institute of Technology Bombay, an elite engineering school in Mumbai. Trivedi took the IIT entrance exam and was accepted into the school. Although his parents could not afford to send both Trivedi and his brother, who was attending veterinary school, to college, Trivedi received a scholarship for IIT.

Upon arriving at IIT, Trivedi encountered some immediate obstacles. While professors teach in English at IIT, Trivedi had learned in Gujarati in high school. In addition, because of his low-income background and reserved personality, Trivedi had difficulties making friends.

“People only talked to me when they needed help with studies,” Trivedi said, who would not want to go out to eat or even buy a bottle of Coke so as not to spend too much.

Despite this, Trivedi performed at the top of his class. After graduating from IIT, Trivedi worked for two years to support his three younger siblings and retired parents.

Then, Trivedi came to the United States for his Ph.D. from the University of Illinois, and he later became a professor at Duke in the department of electrical and computer engineering.

Now, Trivedi is passionate about giving back to his community. He sponsors various schools and scholarships in India.

“Coming from low income, giving back to education is built into me,” Trivedi said.